Ask someone what they know about zinc oxide (ZnO) and chances are they’ll talk about sunblock or perhaps medicated creams. But as we know, ZnO is so much more! In fact, it’s used for so many purposes that even a chemist is unlikely to know about all of them.

Today we are going to discuss how zinc oxide is used in agriculture to help feed the world. Zinc oxide, such as our grades 500WSA and 800WSA, is considered to be a vital micronutrient for the health of a variety of crops and farm animals. Plants, like animals, can have a zinc deficiency, which could affect growth rates or general health.

Zinc is the 23rd most abundant element in the earth’s crust and it is the second most abundant trace mineral in the human body, after iron. In humans, zinc is necessary for growth and development, our sense of taste and smell, our immune response, cell growth, wound healing, and metabolism. Zinc occurs naturally in some foods like meat, shellfish, and dairy but it is also added to foods that do not naturally contain zinc. These products are fortified with zinc compounds that are mostly derived from zinc oxide.

In agriculture, zinc oxide is an important element needed to make seed pretreatments, fertilizers, and foliar sprays. As a result, almost every type of crop is exposed to Zochem products at some point every year in its growth cycle. Zinc is an essential micronutrient for the development and growth of plants. Zinc-deficient soils produce smaller plants and lower yields. Crops that have received zinc supplements are also richer in zinc at harvest. This is a significant benefit to the humans and animals who consume those crops.

Here’s a quick take on how ZnO benefits agriculture.

Seeds – zinc oxide is added to liquid formulations, mixed with other micronutrients, and added to seeds before they are planted. This gives the seeds an early growth spurt and the plants grow faster and produce better crop yields.

Fertilizer – added to the soil at the time of planting, fertilizers are critical to plant growth. Zinc oxide is used to produce zinc sulfate, zinc nitrate, and other zinc-based crop nutrition products. These products are more water-soluble than zinc oxide and the crops are better able to get the zinc out of the soil. Corn and beans are the biggest crops that require zinc. And almost all row crops need zinc in some amount. As little as one or two pounds of zinc per acre can significantly increase yields.

Foliar Sprays – chelated (processed to be more easily absorbed) zinc additives are produced with zinc oxide and various chelating agents. They are sprayed directly onto the leaves of plants and trees. The zinc is slowly absorbed into the cells of the leaves to provide the trace amounts of zinc micronutrient needed for growth. This is used on fruit and nut trees, grapes, and other plants and vegetables.

As the world population continues to grow, zinc oxide will remain a critical ingredient in helping to feed the ever-growing planet. Zinc deficiencies still need to be corrected in many parts of the world so the demand for zinc has never been greater. 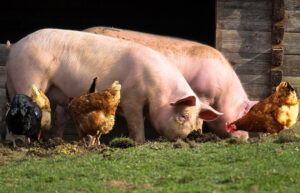 For decades, ZnO has been a popular feed additive for raising healthy farm animals. Some veterinarians even refer to it as “Vitamin Z.” As a trace nutrient, the addition of ZnO to feed can prevent otherwise common zinc deficiencies from occurring. According to the online industry journal, “ThePigSite,” such deficiencies may result in “reduced feed intake and growth, parakeratosis, impaired wound healing, alopecia, thymus atrophy, and impaired immune function.” ZnO has also been a staple additive for keeping pigs healthy when weened.

Poultry can also suffer from a zinc deficiency if not attended to. Those raising poultry consider ZnO a vital nutrient in the battle against various health disorders. As with other animals, trace amounts of ZnO also encourages full growth and vitality. This is especially true in improving digestion, strengthening the immune system, and easing stress-related issues.

For beef cattle, studies have shown that zinc additives can increase the amount of weight gain for the same food intake. The University of Georgia Extension has found that “Zinc is a component of many enzymes and is important for immunity, male reproduction, and skin and hoof health. Cattle have a limited ability to store zinc and supplementation is always necessary.”

When used as a feed additive, a precise amount and form of zinc must be used. Too little can be ineffective. Too much might be harmful. That is an important reason that animal feed producers must have dependable suppliers like Zochem who can provide zinc oxide with very consistent purity and consistency.

Zinc and zinc oxide will always play an important role in human, plant, and animal nutrition and Zochem will be a part of that for many decades to come.